The EFF has released a document answering common questions regarding land expropriation without compensation. What are Christians to make of their policies and ideas? This article is a Biblical reflection on their proposal. I am not writing to offer my own solution to the land issue, but rather to compare the EFF’s policy on the issue of ‘the land’ and the teachings of Scripture.

I want to start by affirming the EFF’s stated heart which is the “redress of colonial and apartheid injustice.[i]” God’s law is written on mankind’s heart, and this goal of the EFF certainly reflects God’s attitude toward the injustices of Apartheid and Colonialism.

Before looking at the EFF’s policy we need to look at what the Bible say about property ownership? The great moral law laid down in the Ten Commandments starts us off: “You shall not steal…” (Exodus 20:15) and Deuteronomy 5:21 says, “‘And you shall not covet your neighbor’s wife. And you shall not desire your neighbor’s house, his field…”(some translations have the word ‘land’ instead of ‘field’).

These two commandments have an assumption, namely that there is stuff that belongs to one person and not to another person (it is not communally owned). This private ownership by individuals extends to houses and fields.

The Scriptures while forbidding theft, do explain how land may lawfully be acquired. It may be passed down through an inheritance (Proverbs 19:14 and Deuteronomy 21:16). Or it can be acquired through hard work and wisdom (Proverbs 10:4; 13:4;14:23; 3:16; 14:15). This is based on people being allowed to benefit from the work that they do; by drawing a salary, saving their money, and purchasing things like land (1 Corinthians 9:9-11)

Private property and the protection thereof is made emphatic in the Scripture when it forbids surreptitiously acquiring someone’s property or enlarging your own (Deuteronomy 27:17).

We also have an example in Scripture of the ‘State’ seeking a private individual’s property. In 1 Kings 21 Ahab wants Naboth’s vineyard but Naboth doesn’t want to sell it to the king. In the end Ahab’s wife, Jezebel, has Naboth killed and his land stolen, with the coveted land ending up in the hands of Ahab. Ahab and Jezebel are both judged by God for this wicked act.

Undergirding that story and the preceding commands and instructions of Scripture is the assumption that God is the true Owner of everything. The Scripture describes God as, “God Most High, Possessor of heaven and earth” (Genesis 14:19); and the owner of all the earth (Exodus 19:5; Psalm 50:12). God owns the land and has placed man on the land as stewards. As we have seen this doesn’t mean individuals and even corporations cannot own land. Instead our ownership of private property should be seen as a gift from God, as well as a duty to use it for His glory. Acquiring property through theft (Exodus 20:15), government orders (1 Kings 21) or fudging boundaries (Deuteronomy 27:17) is sinful.

The idea of private ownership of land for individuals and families has been set as a Biblical precedent. Therefore, we can see the antithesis of God’s law in any ideology that would seek to take private ownership away from people and give the land to the State. With the State as the owner of land they usurp the place of God, and attempt to control individuals, families, the church, schools and any other institution. The State and its worldview becomes the determiner of the best interest of the people.

We would do well then to think through the interplay between the State as the owners of the land and the influence it can then exert consistently with its worldview. What the State thinks about social issues such as abortion, sexuality, and pluralism will be inescapable. Who the State chooses to ‘bless’ in its ‘sovereignty’ may on the surface be one issue (i.e. race, the disenfranchised, the poor, etc), however it is by no means limited to those parameters. 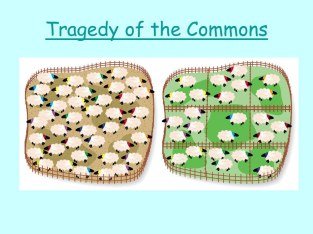 scientists call ‘the Tragedy of the Commons’. The Tragedy of the Commons’ is a ubiquitous problem where things like property are held in common. Imagine a situation where ten individuals all have access to the same piece of land, each have a motivation to maximize their profit from the land, but none have a motivation to delay exhausting the land, since they know that the nine others would want to maximise their profit in the short term, even if they don’t. The result is that people will maximise their output from land but minimize their input into the land; this results in land exhaustion. However, if an individual owns the land, they have a motivation to prolong the profitability of that piece of land for themselves[ii]. If you want to see this lived out, look at the walls of public bathrooms and then look at the walls of private bathrooms. As Christians we believe in the depravity of man, and so should not be taken by surprise that people put themselves first, whilst being suspicious of the actions and intentions of others.

With this as a Biblical reflection let’s look at the statements made by the EFF. In their position paper on the topic this is what they have to say:

Expropriation is a legal mechanism through which the State takes over property owned by other entities, be they private individuals, companies, trusts or community-based organisations[iii].

This land must then be placed under the custodianship of the State, which will administer and redistribute it equitably to all South Africans for residential and productive use[iv].

The underlying principle is that land is a common natural endowment that everyone must be able to reside or produce on, and satisfy their spiritual requirements from. What is to remain in private possession would be the manifestation of an individual’s labour, such as crops, trees and buildings – but not the land[v].

Remarkably, the only conditions under which a common ownership would work is identified by the EFF, they say, “It will … require a State that is decisive and intolerant of corruption[vi]. Decisive people we can find, but corruption is part of being a human, it’s part of having a fallen, God-resisting nature. Private ownership distributes the effect of that corruption so that it can be checked and balanced. In a private property system, individuals must consider their perpetual good and thus conserve land and resources. There is a selfish motivation to sustain and protect, since it belongs to them. People are still corrupt, but that corruption is spread broadly over many people. In this way private ownership of property restrains wickedness.

However, if you give the ownership/custodianship of the land to a few, then the checks on their depravity are gone. The power that comes with being the owners and arbiters of land use is the very power that will corrupt, as the proverbial saying goes, “power corrupts; absolute power corrupts absolutely”.

The EFF does say that the first stage of State Ownership will lead to “more progressive forms of collective ownership[vii]”, however this falls within the same issues already discussed in this article.

As Christians we must affirm restitution for wrongs as a Biblical principle. We must also acknowledge that the issue of restitution cannot be viewed simplistically but in this fallen, broken world there will be no Utopia. That is not to say we must not strive to do right but understanding that ‘right’ must be thought through in a vigorous and deep way. Whatever the answer to South Africa’s land issue will be, it should not be the denial of private property and the ownership of property by the State. This is not what will empower people, but rather what will empower the State.

We need to start by looking at things in Biblical paradigms, because apart from that we know nothing will really work. If we look at this issue from the perspective of protecting people’s comforts, we will ignore what Scripture says about restitution, instead we will only love our own flesh (Ephesians 5:29). Only the gospel opens people’s hearts to see their brother without these world’s goods and open their heart to them (1 John 3:17). It is also the gospel that enables us to see that there is a way to redress the wrongs of the past that seems right to man, but the end thereof is death (Proverbs 14:12).

My final warning would be this, if as a white South African, your response to this issue of redressing past injustice is in no way nuanced and different from your non-believing white friends, then there is a good chance that you need to relook at the foundations underpinning your outlook. The same must be said for black South Africans –  if your response is the same as any political ideology that has historically opposed Christianity in every instance of its manifestation in a country (i.e. Communism), it would be very wise to very carefully examine the foundations of the solutions they propose and sift them through the Scriptures.