This is the eighth in a series of posts I am doing on pivotal moments for the Gospel in South African history. If you would like to read the first in this series click here

The Voortrekkers having successfully made their way inland formed two republics. They named them The South African Republic (SAR) and the Orange Free State (OFS). Lindley the faithful missionary who spent much time with the Voortrekkers resigned from his post in 1847. How would the few Dutch Reformed churches speckling these new Boer republics obtain a minister? [i]

In 1849 Andrew Murray (junior) was inducted into the church in Bloemfontein. In the following few years he made a number of preaching tours in the Transvaal Republic (another name for the SAR). On no less than two occasions did the Transvaal churches invite him to be their minister, but he refused.

At this time there were a number of discussions about incorporating the Transvaal congregations into the Cape Synod of the Dutch Reformed Church (DRC). In 1853 Dirk van der Hoff, a minister from the Netherlands arrived in the Transvaal. A general assembly was held with church and civil leaders; these leaders decided against incorporation in the Dutch Synod.

Why did they refuse this?

Firstly, the Transvaal Republic had too much of an independent spirit to go along with an incorporation, especially with the British ruled Cape Colony. Secondly, the Trekkers still resented the fact that the Cape Synod had condemned the Great Trek in 1837, and since then had refused to provide a minister for them. Thirdly, since they had secured the services of Van der Hoff, meant that they no longer required a minister from the Cape Synod.

And so it was in 1853 that the second Dutch Reformed Church came into being, known in Afrikaans as the Nederduitsch Hervormde Kerk. This became the official state church of the Transvaal Republic.

But this unity against the Cape Synod did not mean unity amongst the Transvaal church itself. There were a group of Calvinist families who were unhappy with Van der Hoff’s lack of confessional orthodoxy. The tension eventually manifested itself over the issue of hymn singing. Traditionally the Dutch Reformed Christians only used the Psalms. However in 1807 a hymnal was introduced to the churches in the Netherlands. By 1814 this hymnal made its appearance in the Cape. However the ‘Dopper’ (name for the strict group of Calvinists) group did not welcome it. They argued that the hymns were composed by the art of man, and thus could not compare with the inspired words of the Psalmist. This issue became the symbol for a fully confessional Reformed church. 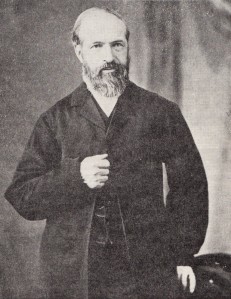 In 1858 another minister from Netherlands arrived in the Transvaal, his name was Dirk Postma. This man’s theological convictions were in sympathy with those of the Doppers.

At a General Assembly of the Hervormde Church held in 1859, the divisive issue of hymn singing reared its head. Van der Hoff suggested that the issue should be left to individual ministers to decide for their own churches. This was rejected however, and it was insisted that the hymn book be used in all public worship.

Fifteen conscientious objectors approach Postma to help form a separate church in which they could maintain their principles. Thus in 1859 a third Dutch Reformed church came into being, known in Afrikaans as the Gereformeerde Kerk. This new church modelled itself on the doctrines, discipline and church order of the Synod of Dort.

Despite the small start, due to the dedication and ability of Postma, they put down deep roots and today number around 100 000 members in about 300 congregations.

After Postma’s death, the leading figure of the Gereformeerde Kerk was a remarkable Jewish Dutch poet, Jan Lion Cachet. Cachet was born in 1838 in Amsterdam, the grandson of a Jewish immigrant from France who had been converted to Christianity by Isaac da Costa, also a Jewish Dutch poet who had converted to Christ and played a leading role in the 19th century Réveil (awakening) in the Netherlands.

In 181 Cachet responded to a call by the Dutch Reformed Church for teachers and came to South Africa. Having had experience in different parts of Southern Africa as a teacher, he joined the Gereformeerde Church in 1865. Cachet was deeply impressed by the convictions and integrity of the ‘Doppers’ and their stand against the inroads of modernism into the state church.

Cachet served as an assistant to Postma, who provided him with needed theological training. This led to his ordination in 1868. Later Cachet himself played a leading role in training men for ministry in the Gereformeerde Church.

Cachet was a renaissance man. He was a lover of poetry and literature, he could recite from memory many works of his favourite Dutch poets. He was particularly fond of the English author William Thackeray. Cachet wrote extensively in English, Dutch and Afrikaans, but his finest poetry and prose was written in Afrikaans. One of his most popular books The Seven Devils and What they did ran into many editions.

Cachet had a brother, Frans, who also played an influential role in the spiritual life of the Boer republics. Frans who was dissatisfied with the state of affairs in the Hervormde Church travelled throughout the Transvaal in 1866 establishing Dutch Reformed (Nederduitse Gereformeerde) congregations in various places. These congregations formed a synod and eventually linked up with the Cape Dutch Reformed synod.

By the year 1870 there were three separate bodies of Afrikaans Reformed churches in the Transvaal. The fact that their different names all translate into the English word ‘Reformed’ causes endless confusion among English-Speakers (like me). So here is a helpful table to show the difference.

These three denominations became known in South Africa as the three sister churches, although the GK and the NHK have always been much smaller than the predominant NGK. Notwithstanding considerable inroads made by the Pentecostal movements during much of the twentieth century, the three sister churches still encompass the great majority of Afrikaans-speaking Christians to this day.

2 comments for “The Gospel in South Africa #8: Two New Churches are Born”