With God’s sovereign removal of exclusively white political rule in South Africa, there have been implications for Christianity that has arrested many thinking South Africans. Is Christianity just a white man’s religion, a tool of 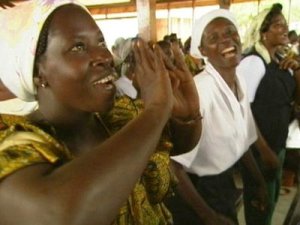 oppression and control? Does one deny their identity by converting to Christianity? These are real questions that are grappled with from the university campus to the privacy of people’s homes.

Now you might think it odd that I as a white South African, a first generation immigrant child to this country can speak to this issue. On the contrary this issue is one Europeans have something meaningful to contribute to, since we know what it is to have gone through almost 1500 years of Christianity renewing our culture, ideas and identity.I may just as well ask if Christianity is relevant for whites.

The Problem with the Claim

Saying that Christianity is a white man’s religion has two main issues right off the bat. Firstly, it assumes a historical fairytale. It is like saying that cars are a white man’s form of transport. Believe it or not, there was a time when Europe was even less Christian than it is today. Just as there are movements in African thought that are calling black people to go back to their roots and accept only ‘truly’ African philosophies, there are also movements in European culture calling whites to go back to their pagan European roots, and to abandon the Judeo-Roman religious imperialism of Christianity. So to whom does Christianity belong? Whites? Jews? Romans? Palestinians?

Christianity might have European forms attached to it as a result of it spending time renewing European culture away from ancestor worship, human sacrifice and bloodlust, but that by no means makes the message of Jesus a white message. I do find it ironic as well that this accusation is a radical form of the black consciousness movement, which itself was rooted in Christianity; does that make black consciousness a white ideology[i]?

The second issue that I find rather odd, is that the same people who accuse Christianity of being a white concept, and thus to be rejected by black South African’s, would then still support and promulgate things like Communism, Democracy, Secularism, Feminism and Capitalism- all ideologies firmly originating in white cultures.

Now some people respond to this claim by pointing to the wonderful legacy of Africa and Christianity. They rightly point out that African men are in the biblical narrative starting from the Old Testament through to the New Testament, an African man was one of the first Christian converts in Acts 8:26-40. They show us that Africans are some of the people who have shaped what we understand and know about Christian thought and theology today, men like Athanasius born in Egypt and Augustine who was born in what is modern day Algeria. In fact the Reformation in the 1500’s in Germany and the theological implications resulting from that can all be seen as a result of Augustine’s teaching. Thus the most significant event in church history since the destruction of Jerusalem in 70 A.D is the result of an African’s reflections on the Faith that Jesus came to bring.

This legacy is wonderful, something that should fill our hearts with joy at God’s gift to Africa and His choice to allow Africa to be part of His plan to spread the gospel to the ends of the earth. But it is lousy as a reason for why it is relevant to Africans. If the historically significant relationship between Christianity and Africa is what makes the gospel relevant to Africans, then what about those who live in the far east? Is the gospel not pertinent to the Japanese? Or what about the aboriginal tribes of Australia, the Māori islands or the Americas?

So while the history of Africa and Christianity might show how it has been relevant, and may be something to be thankful for, it is not a good reason to argue for its relevance to Africa.

Why is it Relevant

The Christian message is not a list of syllogistic reasoning’s or ideas derived from a bunch of white guys sitting around. If it was then it would be a white man’s religion in the sense that it came from their minds. However, it’s also not a result of a bunch of Jewish guys sitting around and thinking religious thoughts.

Christianity and its message is about the crossing of a huge cultural barrier. God became man, humbled himself and came from heavenly beauty, to an earth of misery and savagery. He didn’t come primarily to teach ideas, but he came and something happened quite outside of cultural perceptions. Jesus went to a cross and as an actual historical event died, and then three days later rose from the dead. This is the message of Christianity; it’s about a historical reality that no matter what your race, religion or culture happened.

Even more than that, if you reject Christ you will lose your identity, no matter how hard you try to hold onto it. “The Bible teaches that there is one God in a community a Trinity of three persons who each perfectly know and defer to one another and love one another and therefore have infinite bliss and beauty and harmony. God made a good, beautiful world filled with beings who share in this life of joy and peace by knowing, serving, and loving God and one another.

What went wrong? Instead, we chose to centre our lives on ourselves and on the pursuit of things rather than on God and others. This has led to the collapse of creation and the loss of peace — within ourselves, between ourselves, and in nature itself. War, hunger, poverty, injustice, racism, bitterness, meaninglessness, despair, sickness, and death all are symptoms.

What puts the world right? But though God lost us, he determined to win us back. He entered history in the person of Jesus in order to deal with all the causes and results of our broken relationship with him. By his sacrificial life and death he both exemplifies the life we must live and rescues us from the life we have lived. By his resurrection he proved who he was and showed us the future — new bodies and a completely renewed and restored new heavens and new earth in which the world is restored to full joy, justice, peace, and glory.

How we can be part of putting the world right? Between his first coming to win us and his last coming to restore us we live by faith in him. When we believe and rely on Jesus’ work and record (rather than ours) for our relationship to God, his healing kingdom power comes upon us and begins to work through us. Christ gives us a radically new identity, freeing us from both self-righteousness and self-condemnation. This liberates us to accept people we once excluded, and to break the bondage of things (even good things) that once drove us. He puts us into a new community of people which gives a partial, but real, foretaste of the healing of the world that God will accomplish when Jesus returns”[ii].

[i] THE SHARPEVILLE MASSACRE: Its historic significance in the struggle against apartheid by David M. Sibeko