This is the fifth in a series of posts I am doing on pivotal moments for the Gospel in South African history. If you would like to read the first in this series click here

Moffat sat in the large wooden room, the directors of the London Missionary Society looking warmly at him. With a deep Scottish accent he began to recount his Christian home, where he and his six brothers and sister grew up hearing their mother read the exiting adventures of the Moravian missionaries in Greenland and the East Indies. He told of how he was apprenticed to be a gardener at 14, but pursued his studies in evening school. Then in 1815 at the age of 21, after meeting some men from the Wesleyan Methodist society he came to faith in Jesus Christ. “I would like to be considered as a candidate for the mission field.” He explained. The directors agreed and after a brief time of theological training Moffat found himself on a ship sailing to Cape Town, not to see his family again for some 23 years. The Mission Society had intended to send him to a position beyond the frontiers of the Cape Colony; but permission for this was refused by the governor, Lord Charles Somerset. Somerset didn’t allow colonists to proceed beyond the border and he was not about to make an exception for a missionary.

Moffat spend a few months in Stellenbosch with a farmer. Here he grasped a working knowledge of Dutch. Finally just when he couldn’t wait any longer, permission was granted and Moffat set off with a companion for Afrikaner’s Kraal in Namaqualand, an area ruled by a former brigand, Jager Afrikaner, who had recently come under the influence of the gospel. But this journey was not without incident.

One evening on their journey to Afrikaner’s Kraal they stopped to rest at the farm of a wealthy Dutch patriarch. They were treated warmly and given a generous meal. After supper the host gently looked to his children and had them remove the plates, “It is time for family prayers, I do hope you will join us for them.” Naturally Moffat agreed, what more could a missionary want than to spend time in prayer. As they readied to pray, Moffat looked around and innocently asked “But where are the servants?”. “Servants! What do you mean?” countered the patriarch. “I mean the Hottentots” replied Moffat,” of whom I see so many on your farm”. Nostrils beginning to flare, in a conversation that escalated all too quickly, the host retorted, “Hottentots! Do you mean that then? Let me go to the mountains and call the baboons, if you want a congregation of that sort. Or stop, I have it: my sons, call the dogs that lie in front of the door. They will do.” Moffat dropped any attempt that would then have led to a violent ending. After singing a psalm and praying, Moffat read the lesson of the Syrophoenician women who asked Jesus to cure her daughter and chose as his text the words, ‘Yes, Lord, but even the dogs eat of the crumbs that fall from the master’s table.’ His host interrupted quietly this time,” Will Mynheer sit down and wait a little? He shall have the Hottentots.” The diverse throng trooped in, many of whom had never heard a preacher before nor seen the inside of their master’s house. When the service was over, the farmer turned to his guest and said, “My friend, you took a hard hammer and you have broken a hard head.”[i]

After spending about a year at Afrikaner’s Kraal, Moffat was asked by the

LMS to assume control of its work among the Tswana people, and so he came to establish the mission station at Kuruman which became the headquarters of all his activities for the next forty-five years. Moffat was able to put his gardening experience to good use. He built a waterway nearly 5km long to bring water to the mission station. Kuruman became famous for its beautiful and fruitful gardens. One day as Moffat began work on the gardens, he noticed a group of Tswana people laughing at him. They thought it was crazy for Moffat to carry around large bags of cattle manure and then dump it on his garden. To them this was a rather stinky and foolish way of ‘charming’ the ground. They simply chewed a certain root and spat on the leaves of their plants to help them grow, but all this work with dung was rather a silly bit of entertainment to them. But not long after this, they were convinced; they saw how the manured gardens didn’t get old but were revived by the effects of the natural compost. From that time on it was very normal to see people carrying loads of manure on the back of their oxen. One individual remarked to Moffat, “I cannot persuade myself that we were once so stupid as not to believe what we saw with our eyes.”[ii]

All this time, in his preaching and working, Moffat’s heart lay with a certain Mary Smith in England. He had met her while working as a gardener for her parents, and the two had been in love since. At first her parents had refused to let her travel to Africa to marry Moffat but at last they relented, and in 1819 the couple were married in Cape Town.

In 1822 Moffat unexpectedly come across a party of San digging a grave for a woman. They were planning on burying her orphaned children along with her, that they might be cared for by their mother in the shades of the other world. Moffat begged to adopt them, and the San agreed. Rejoicing in the names Dicky and Ann, they became a part of the Moffat household, joining Moffat’s biological children[iii].

Despite some progress, spiritually the work at Kuruman was disappointing. There was no perceptible response to the message preached by Moffat. He persevered in learning the Tswana language and by 1825 was able to send the manuscript of a Tswana spelling book to Cape Town to be printed. A couple of years before that, an incident occurred which greatly enhanced the status of Moffat in the eyes of the Tlhaping people among whom he lived. The rise of the Zulu kingdom of Shaka led to the massive disruption of societies in a large part of southern, central and eastern Africa. One of Shaka’s generals, Mzilikazi, clashed with him and then fled with a large following, cutting a swath of destruction extending from present-day KwaZulu-Natal into the interior and up to present-day Zimbabwe where he finally settled. As one tribe was dislodged from its territories by invading impis (warriors), it would in turn invade the territory of neighbouring tribes. One such tribe was the Tlokwa, ruled by a woman called MaNthatisi. When Moffat heard that the Tlokwa warriors were planning to attack the Tlhaping, whom he judged would be no match for the invading army, he hastened to Griquatown and persuaded the Griqua chief, Waterboer, to come to their assistance. With a hundred mounted men armed with rifles, Waterboer was able to repel the much larger Tlokwa force and thus save the Tlhaping from possible extinction. The missionaries were now held in greater esteem among the people. Nevertheless, it took another six years before the hoped-for spiritual breakthrough finally took place in 1829, shortly after the people began to give greater attention to the preaching of the gospel.

Quiet apart from doing anything out of the ordinary, and as a mere result of the preaching of the gospel a wave of strong emotion broke over the inhabitants on one particular day. The inhabitants of Kuruman crowded the place of worship long before the service was timed to begin. Men, women and children were bathed in tears. Some would listen with intense earnestness to the tones of the preacher’s voice, and then suddenly fall down in panic and fear of God’s judgement, or lay down prostrate in mourning and repentance. At all hours of the day the missionaries would be beset in their homes by numbers of anxious seekers after salvation. Those who had found peace would gather for prayer and praise, and at early morning and late evening the voice of rejoicing and salvation was heard in the homes of believers[iv]. From this time on, the work progressed steadily. A large church building was erected which could seat 500. It was here that the baptism of the first six converts, followed by the first Lord’s Supper was to be celebrated at Kuruman. After thirteen years a church had been established among the Tswana people in which the sacraments could be observed. 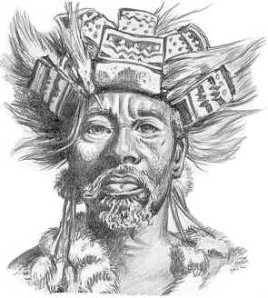 Towards the end of 1829 Moffat made the first of his visits to Mzilikazi who, after his flight from Shaka in Natal, had established his Ndebele people as the dominant power in the highveld of the northern Drakensberg. From his base in the Magaliesberg, Mzilikazi sent two of his indunas (counselors) to visit Moffat. He returned with them to meet the great king whose very name struck feelings of awe or terror in the hearts of thousands. On his way to Mzilikazi, Moffat could not help but note the many evidences of warfare that had ravaged the entire region in recent years – the ruins of many villages and piles of bleaching bones. He was well received by Mzilikazi who, laying his hand on his shoulder, said, “My heart is all white as milk: I am still wondering at the love of a stranger who never saw me. You have fed me, you have protected me, you have carried me in your arms. I live today by you, a stranger.” Moffat replied, “But when did I do all that for you?” Pointing to the indunas who had visited Kuruman, the chief answered, “These are great men. Umbate is my right hand. You fed them and clothed them, and when they were to be slain, you were their shield. You did it unto Mzilikazi, the son of Machobane.[v]” One cannot but be reminded of the words of a greater king recorded in Matthew 25, ‘Whatever you did for these … you did for me.’ Moffat developed a friendship with Mzilikazi that was to last over thirty years. Four times the missionary visited the chief. On the last occasion the Ndebele king was residing in Bulawayo (in present-day Zimbabwe), his headquarters north of the Limpopo to where he had withdrawn after being defeated by the Voortrekkers in 1837. Moffat was not, however, to have the satisfaction of seeing his friend accept the Christian faith. By the 1850s Moffat had translated the entire Bible into Tswana and spent some time in England to see it through the press. It was during this time that David Livingstone heard him speak and felt inspired to come to Africa. In the 1860s Moffat and his wife suffered a series of blows: the deaths of their son, their daughter and a son-in-law; and a personal attack on Moffat that nearly killed him. In 1870, he and his wife finally left Kuruman to spend their remaining years in England. He was greatly honoured in the land of his birth. Twice he was summoned to meet Queen Victoria; twice he breakfasted with William Gladstone, renowned statesman and several times Prime Minister of the United Kingdom. Moffat died in Kent in 1883.

← The Gospel in South Africa #4: The First Indigenous Minister
Horror: A Christian Perspective →

2 comments for “The Gospel in South Africa #5: The First Missionary to the Interior”