Masculinity is in a mass state of mass confusion. Feminism, anti-hero’s and Bieber are stirring the pot. So before you get tired of yet another diatribe on masculinity, stop and try define what it means to be a man, not so easy is it?

John Piper said something helpful on masculinity (actually he said allot, but I’m homing in here), he said that true masculinity matures. That’s why boy are not men, and sadly why some men are still boys.

I don’t think previous generations spoke much about ‘what makes a man’. Part of the reason for this may be that our generation is in the wake of feminism that has confused contemporary culture regarding gender roles. A second reason may be that men in previous generations were exposed to things that forced them to grow up; while today boys can survive into their adulthood with modern conveniences and tolerances plugged into them, keeping their adolescence on life-support.

There are five realities that I recently came across that a man must come to grips with if he is to mature in his masculinity. I hope you find them helpful.

1. You are going to die. God said to Adam, “The day you eat of the fruit, you will surely die”. Man, you need to come to grips with your 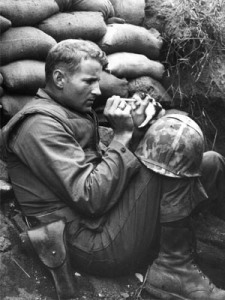 own mortality. Adam as our representative ate the fruit, and he died; spiritually at first, and physically later. I think this is what made Jonathan Edwards such an influential man, consider these resolutions that he penned:

9. Resolved, to think much on all occasions of my own dying, and of the common circumstances which attend death.

10. Resolved, when I feel pain, to think of the pains of martyrdom, and of hell

Realize you will die. Weep about it. Get over your teenage, invincibility fantasy. Then seek hope in Christ that He is the resurrection and the life, that though you die you will live.

2. Your life is not about you. I am not sure what Adam was doing when Eve reached out for the fruit on the tree. Was he watching, curious about what might happen? Was he using Eve as a

guinea pig? Or was he off doing his own thing, not concerned with Eve’s temptations? Or consider the fact that Adam took the fruit and ate it himself; in that moment he was thinking it’s all about him, “This tree is here, it must be for me.”If you don’t realize this truth you are never going to be able to love your wife as Christ loved the church and gave Himself for her.  You will be hamstring when it comes to showing mercy, kindness, generosity and faithfulness. You will have a hard time showing true bravery, courage and loyalty. Realize that the world was made for God and His glory. You were made for God and His glory. The Bible was written about God, He is the central character. Weep over the fact that you are not the centre of the universe, and that there is a pretty good chance that you will die and be forgotten. Afterwards celebrate that the universe is about something far greater than you, and that if the universe is about God, and you are part of it, you have far more significance than if you were the centre of it all. 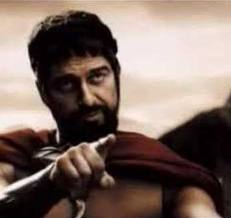 3.  You do not control the outcome of things. Now this is a risky one; I don’t want to promote the plague of passivity that is so pervasive. This is not the same as saying you don’t have influence over your environment. This is not that same as saying that you are not responsible. What this is saying is when things go well, it is because of God’s goodness and kindness. This protects men from pride and arrogance that so easily overwhelms us. Pointing to the sky when you score a goal and acting like an arrogant jerk afterwards is not giving God the glory. If you work hard and plough a field and water it (with water God provided) and it grows to a bumper crop, you didn’t make it grow God did. If you raise strong, godly, kind sons and daughters it’s not because you control their hearts, it’s because God worked despite your weaknesses and blessed your efforts.

4. Life is hard. After the fall God cursed the ground and told it to bring forth thorns and thistles,

He then told man “You shall work by the sweat of your brow and by that sweat you will eat bread.” Summary: Life is hard. The sooner you realize this and stop whining the sooner you will mature in masculinity. I think allot of men remain in the realm of boys because instead of facing this reality the escape in computer games, T.V and porn- constantly avoiding this reality. Think about this truth; weep about the curse on the world due to our sin. Then celebrate that God’s is redeeming the world, and that you are able to make some of it a bit better; and that one day in the new earth the curse will be over and all things will be new and perfect.

5. You are not that important. If you sleep the world will keep spinning. If you die everything still keeps going. You are important to friends and family, but not that important. Moses thought he was that important once, he didn’t circumcise his son which was a sign God made with him of the covenant between them. God had already told him that he was going to be used to free his people, but God was willing to kill Moses for this act of disobedience before he had freed the nation of Israel (Exodus 4:25). Moral of the story, you are not that important. We have partly seen this already since we don’t control the outcome and our lives are not about us. So be less stressed about life, don’t think more highly of yourself than you ought to, and associate with all kinds of people (cause none are beneath you).

The man who avoids these truths will be trapped in some kind of perpetual adolescence. It is my hope that men will consider these, mourn them, and then celebrate Christ.