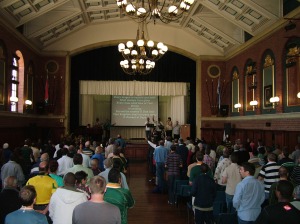 The Baptist Union of South Africa held its 2011 assembly in Port Elizabeth over this past weekend. It was my second assembly, and my last as a probationer. This assembly had many highlights and BU quirks that I hope to share in this article.

Registration happened at a Presbyterian Church, we met at an Anglican School and many of the delegates were accommodated at a Roman Catholic lodging- it may sound ecumenical but it was more a baptism of the baptised for these groups.

One thing I learned about South African Baptists is that we can make the most unmusical song possible somehow sound musical. We had a theme song for the conference and the first line went like this, “We need effective Bible leaders”- oh the musical pain! However it gets the point across, this is what the BU was driving for as we met this assembly- Next year’s theme, “We Need Better Rhyming Theme Songs”

A welcome change to the assembly program was the addition of a time of Bible study and prayer which took up most of the mornings.

The executive decided that since Baptists have historically been known as ‘people of the Book’, it would be good to place that Book in prominence in our meetings; so every morning God’s Word was studied and applied followed by a time of prayer. What a wonderful way to start the assembly! I feel that this was a wonderful move by the executive, it sets the tone for the kind of Baptists we want to be, what a great thing to put God’s Word and prayer as the most important part of our meetings together. We were fed with the Word and sought God’s Face before we went about seeking to do Assembly business- that’s the way to go. My group’s able facilitator was Peter Holness (Trinity Baptist’s Pastor in P.E.), I enjoyed being with this seasoned pastor, he has a real pastor’s heart and I learned from that even in the short time I was with him in the groups.

The Lord’s Day saw particularly interesting business being discussed, which also demonstrated something of how the Union has succumbed to secular pressures. During a discussion on amending the Union’s constitution with regards to a particular issue, the word ‘his’ was used when referring to a pastor, two delegates took exception to this, arguing that it should read ‘his/her’ (as you can well imagine Ephesians, 1 Corinthians, 1 Timothy and Genesis were not the passages being discussed in the morning studies). The response from the pastor chairing that meeting was basically to say that the constitution also says that whenever ‘he’ is mentioned’ both the masculine and feminine is implied; this was not good enough for the two individuals and a motion was passed to change the line to ‘his/her’. So with sadness I witnessed the Union’s bowing down to secular culture and the feministic attitude so prevalent in it, in this case directly disregarding Scripture. 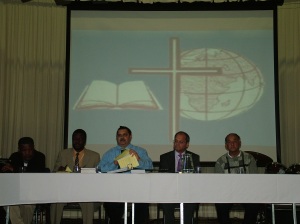 One encouraging move on the other hand, was the tightening up of other aspects of our constitution. While pastors who are going through a divorce immediately have their name suspended from the ministerial list pending an investigation, till now nothing happened to pastors who were merely separated from their wives. This was tightened up and a clause was added which basically states that if a pastor has been separated from his wife for over a year, and there appears no way of reconciling them, the name will be dropped from the ministerial list. I was glad to see the step taken as it shows a desire to hold firm the integrity of the office of a pastor in the Union. Taking a strong stance like this, especially at leadership level bodes well for the growth and nurturing of biblical leaders.

Much of my time was well spent in fellowshipping with like-minded brothers; the four reformers (Mark Penrith, Rocky Stevenson, Malcom Cunningham and 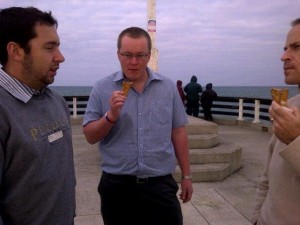 me) and one whose persuasion shall not be labelled (Ian Stuart) had good chats over issues ranging from Eschatology to Liturgy to the meaning of ‘perfect’ in 1 Corinthians 13. On the Sunday Malcom, Rocky and I took Ian to celebrate his birthday with an ice-cream and a walk on the peer; it was a very special time of Christian fellowship. Our little reformed group affectingly dubbed itself BATS- I can’t remember what it stood for, but it reminded me of Batman so I am cool with it.

The Baptist Women’s Division marked their 100th year with a wonderful banquet (from what I hear). This year we have the second none white BWD president over the last century. There were wonderful reports of the chaplain’s work; ministry in the defence force, prisons and police is very tough, but the fruit that those who labour there are seeing is extremely encouraging, to even the dreariest pre-mil…. I mean pessimist.

Another thing I found encouraging about our Union was the racial diversity, we had many people from different races; it truly was something of an anticipation of that day when there will be people from every tribe, tongue and nation worshipping the Lamb.

Even after I left the assembly the good times where not over, at the airport I bumped into Marcus and Sandra Elaya from the Ebenezer Community Church in Pietermaritzburg; we identified each other by the nifty BU blue bags we were given. This lovely couple have been working at a church plant for 10 years in an extremely poor area. It was so wonderful to fellowship with them and hear about their sacrificial work for the Lord. I praise God for bring us across each other’s paths; we enjoyed a good coffee and chat while we waited at the matchbox of an airport for our flights.