The whole idea of adolescence is a relatively new idea in history, it is a side effect of the ‘modern’ method of schooling, which takes people who are physically able to be adults and forces them to wait till all the required schooling is completed. It is not the purpose of this paper to explain all that is involved in the secular view of adolescence, suffice to say it is not a biblical category (the Bible involves children, young men and older men- one ceases to be a child when one “leaves mother and father and cleaves to ones wife”), I’d like to talk about some of the negative influences this concept has had on young men specifically and make a few suggestions.

Many young Christian men today seem to be stuck in some kind of time warp, not readily letting go of their adolescent ways. This is true in the secular world as well (a movie came out not long ago called ‘Failure to Launch’ which is supposed to be a commentary on this social ill). I believe the issue stems from what we have I imposed on people’s minds during adolescence, there a young man has the ability to be an adult (physically), he begins thinking like an adult in certain ways, yet at the same time he is not given the responsibilities of an adult, he is kept protected like a child, this is where I think much confusion and the so called awkwardness stems from. So we have a young man growing up, not being discipled in the way he should (most of the time) and going into adult hood- the problem is how does he now suddenly take on the responsibilities’ he must, since he has had the confusion of adolescents? I know I am over simplifying, but bear with me as I get to my point.

A while back I challenged a young man I know, about a particularly worldy and ‘sub-culture’ styled fashion accessory, his response was “It’s just a phase I am going through”. Now apart from the strangeness of having identified the phase 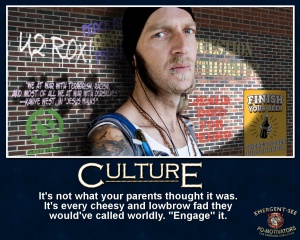 and then deciding to stick with it, how can a Christian man, one who is to demonstrate godliness, self-control, humility…. Christlikeness- attempt to find identity in the same place the world does? It is concerning when men are trying to defend (not to mention those who identify with) bits of the ‘emo’ culture and ‘punk’ culture or whatever it may be… It is even more concerning when men are lazy and enslaved to their entertainment. Packer said about this, “Ease and luxury, such as our affluence brings today, do not make for maturity; hardship and struggle however do”.

How we must pray for a generation of godly young men, that the world looks at and see’s something of Christ in. Men who are known because they: Love their wives, are faithful in church and work, who show some of the orderliness that is from God, who don’t shrink from confrontation, who don’t live passively- men like Joshua, Daniel and Paul, men like Jesus! Men who don’t find joy in the trivial little pleasures of a lost world that finds its identity in trying to be unique or strange or arb. Oh for men who love God more than they love themselves, who esteem God’s word as of more value than their daily food.

Think through these with me:

Do you want to be known as the strange arb guy or the godly Christlike guy?

Do you want to be seen as the sports buff, or someone with a concern for orphans and widows?

Do you want to be the silent mysterious guy, or the one who leaves and aroma of Christ in every conversation?

And even if it’s not a purposeful decision, which of the above is your flesh dragging you towards? If others think of you, what do they think of? “Oh yeah Harry, he is a Arnold fan, a anima know-it-all, a rocker, a gamer, a slacker, a ladies-man…”

If you chase after the same things the world chases, the world will never take notice of the treasure you have, the treasure of Christ. My favorite quote on manhood will serve to close these few thoughts, “The steel of manly character is forged in the fires of control and denial” – Elizabeth Elliot

← The Meaning/Purpose of Life
Resume of Blog. Encouragment for Christians! →

2 comments for “Adolescence Destruction of Manhood”